Apple will permit third-party app stores for Europe in 2024 – Are they good for a discovery? 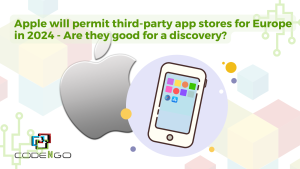 The article suggests these changes might only take effect in Europe and that they might not yet impact users in North America or other regions unaffected by this specific legislation. That would also be a departure for Apple, which (with a few exceptions) has largely offered mostly the same features and experience in each operating system and device across regions. That said, many of the specifics about Apple’s plan are likely still in flux.

There are still more changes called for by the Digital Markets Act that Apple hasn’t yet made specific plans to address, though. Regulators have called for interoperability between messaging systems like iMessage, but Bloomberg’s sources say Apple engineers fear that those changes could jeopardize end-to-end encryption and other privacy and security features of the messaging platform that help distinguish it from alternatives.

Another part of the Digital Markets Act would seem to require Apple to allow app developers to include third-party payment systems in their apps. Apple hasn’t decided how to approach this either, beyond the small concessions it made that let reader and cloud-based apps direct users to web-based payments as part of a recent agreement with Japan’s government.

Further changes in that area will likely impact Apple’s bottom line, as, of course, would the availability of third-party app stores and sideloading.

Apple has always been known for taking the lead in technology innovation. In the past, the company’s walled garden of apps and games has left consumers feeling dissatisfied with a small selection of choices. However, with time and advancements in technology, Apple has become more open to third party app developers. 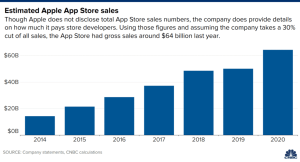 Overall, though, Apple should be able to absorb the financial impact. The App Store makes up 6% of total revenue, and Europe’s contribution to that is likely less than 2%, according to Bloomberg Intelligence analysts Anurag Rana and Andrew Girard.

It wouldn’t be the first time Apple had to make major changes to abide by local laws. The company is also planning to use a USB-C connector on the next iPhones in 2023 instead of Lightning, also to meet an EU regulation. In China, the company has made numerous compromises. That’s included using a local provider to host iCloud data and shifting AirDrop settings in a way that made it harder for protesters to share information.

For now, any guesses on how Apple will open iOS to third-party app stores are merely speculative, since we’re still talking about a rumor. And our take on this, yes, it is worth for a discovery.

As what Adrian Hon wrote, “With the news Apple is planning to support third-party App Stores to comply with EU regulations, I see we’re rehashing the old arguments about whether it’s a good thing. To be clear, I don’t only think it’s a good thing – I think it’s *essential* to the flourishing of digital culture, and it’s astonishing how so many people have become convinced otherwise.”