Why Mobile Gaming Is Becoming More Popular Than Console Gaming

Mobile gaming is becoming more popular than console gaming as the rise of smartphones and tablets makes it easier for gamers to experience games regardless of where they are and introducing millions of people to new titles. Mobile games are often free-to-play, making them a perfect fit for younger gamers looking for fun short sessions.

What has made mobile gaming so popular?

Mobile gaming is a trend that has grown steadily over the past several years and is continuously expanding. According to Globe News Wire Straits Research, The global Mobile Gaming market was worth USD 119 billion in 2021. It is expected to reach USD 338 billion by 2030, growing at a CAGR of 12.3% during the forecast period (2022–2030). North America will hold a share of USD 80 billion, growing at a CAGR of 12% over the forecast period. At the same time, smartphone ownership grew from 175 to 400 million people during that time period. A decade of double-digit growth for the mobile games market has been fueled by various technological and socioeconomic trends, including:

The past decade has seen an astronomical leap in mobile technology. Things like 4G/LTE, the latest Wifi standards, and faster, more efficient mobile hardware development have all made their way from the flagship devices to affordable smartphones and tablets. Generational performance and durability improvements brought by these advancements, in turn, have made mobile gaming accessible to previously untapped markets and demographics. 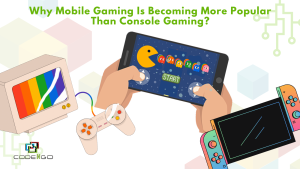 Especially in the past couple of years, there has been an increasing trend of moving from bulky software to lightweight mobile apps for everything we need – finances, work, food delivery, and even stargazing. No other industry has benefited more from this than Mobile gaming. The mobile-driven market has forced developers to create more engaging and content-rich games for their customers. The availability of this diverse array of content has boosted the mobile gaming user base significantly.

Mobile gaming wins hands down in its accessibility and portability. You can play games on a mobile practically anywhere – a distinction that consoles and PCs do not have. In addition, most mobile games these days are platform-agnostic. So, it doesn’t matter whether your smart device runs Android or iOS – you get the same experience everywhere.

The rise of hyper-casual gaming:

Hyper-casual gaming has dominated the reasons behind mobile gaming’s adoption as a lifestyle companion. A trend where the user spends a small amount of time daily playing a game with repetitive levels and gameplay mechanics is often termed hyper-casual. Here, the game is addictive, and the difficulty between each level only changes mildly – so that the user is hooked yet not deterred. Games like Angry Birds, Candy Crush Saga, Subway Surfers, and Temple Run are probably the best examples of hyper-casual games – easy to get into, easy to drop out of, and fun to play.

There’s something for everyone:

Mobile gaming’s rapid proliferation and profitability have caused many traditional game developers to focus on this platform. As a result, the gaming universe in mobile now has the most diverse array of games available for you to choose from. Be it action, strategy, role-playing, puzzle, trivia, word games – if you love a genre, games from it are more likely to exist in mobile platforms than anywhere else. The sheer variety is one of the big reasons mobile gaming continues to rise in popularity.

Mobile gaming has become one of the most popular ways to play your favorite games. Many people think that mobile gaming isn’t as good as console or PC gaming, but nothing could be further from the truth. Mobile games can be just as good, if not better than traditional console or PC games. In fact, many of the most popular mobile games are just as addictive and fun as the best console and PC games out there.

So, if you’re looking for a fun and convenient way to game, then mobile gaming is the way to go. With so many great games available, you’re sure to find one that you’ll love.  And if you’re a developer and you want to get your Android app on the app stores, we’ll help you reach thousands of Android users and earn money from them. Keeping in mind that games are addictive and this helps people spend more time playing a game than watching a movie so keeping the game constantly updated and adding new levels or content can help you gain more popularity in the niche where your game is being played.