As one of the fastest growing economies in the world for the last two decades and a population of 90 million, Vietnam is seen as one of the most promising places for investors and entrepreneurs alike. With almost 70% of the country´s population aging between 15 and 64, the country has up to 60 million potential clients for any industry and service, of course including mobile.

Looking at all the opportunities, I dare to say that mobile developers will be surprised especially by the current growth of the smartphone market. According to a recent Flurry report, Vietnam is the 2nd fastest growing smartphone market by active devices, beaten only by Columbia. It has shown a growth rate of 266% (01/2013, YoY).  China in comparison, thought to be know as the largest smartphone market, no longer leads the world in growth. In January this year, it reached 209%, ranking the 6th largest in the world

Vietnam has more than 130 million mobile phone subscribers and about than 35 million mobile users, out of which, more than 6 million are using smartphones. The country is hungry for connectivity, communication and modernization. The market is expected to have 3.5 million additional smartphones in this year. 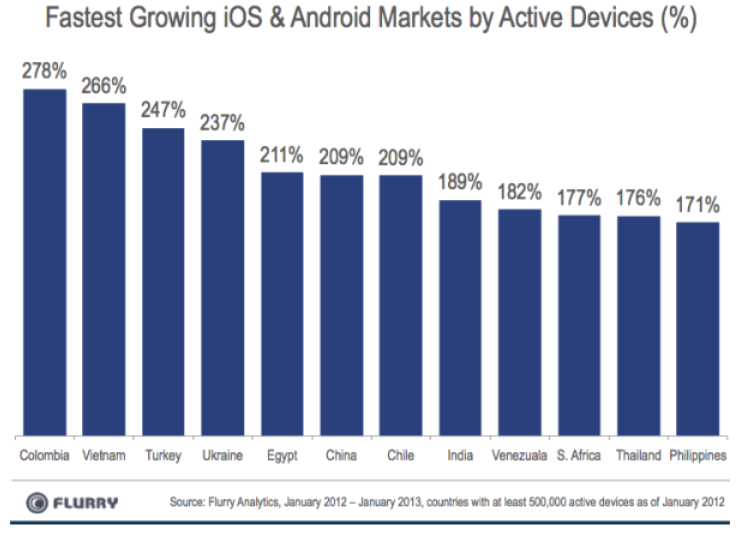 With such impressive figures, of course, the behaviors of Vietnamese smartphone users are interesting to have a quick look at:

Additionally, the most important user behavior from my perspective that should be taken into consideration by any mobile developer who wants to go into Vietnam market is that Vietnamese users have the tendency to hack/ jailbreak their phones. Free is the very important criterion since the country is still poor with a GDP per capita just slightly above $1,500.

So how does this potential in growth apply to a mobile developers business?

From my own personal experience of running “Vietapps Free”, a free app that provides Vietnamese users every day a free app in English and in Vietnamese, I have some pieces of advice that I would like to share with devs who want to go into the market:

Business model: As mentioned previously, paid-apps might work in the Vietnam market, but free-app would be better as almost everyone hacks their phones. So, the business model is the very first thing that developers should think over. An example for this kind of business model is We Chat, the Chinese communication app, which was (!!!) very popular in Vietnam. The app was launched “free” and advertising was the preferred model. The very first step of this app was to build a massive user base, than it could apply ads as it had done in China. However, since there are some recent conflicts between China and Vietnam, Vietnamese have changed from using this app in place of others.

In the case of Vietapps Free, the business model and the idea behind it is the model of “app recommends other apps” like “Free app a day”. To make it more attractive to Vietnamese users, the app recommends both selective, high-quality apps in two languages: Vietnamese and English every day.

Localization: It is needless to say that localization plays a huge role in the success rate of an app. The market of Vietnam is booming faster and faster and is hungry for high-quality apps. However, the local developers still do not seem to be able to build very high-quality apps because of lacking initial investment as well as experience. So, many “global apps” could gain a great deal of users in Vietnam by localizing their apps, even with just translation their apps description into Vietnamese. In Google Play publisher console, developers can do this by “adding translations” in their descriptions and localize other meta data i.e. screenshots and videos. It would make the app more user-friendly, and cover more keywords in the local market.

With the app Vietapps Free, our team tried to localize the app as much as possible, thus make the app meaningful and more friendly for Vietnamese users. The main colors of the apps are yellow and red with a big yellow star in the icon because of the national flag colors, which make Vietnamese users think that this app is Vietnamese app at the very beginning. Additionally, the number of the app recommended in “Vietapps Free” are limited by number 9 as this number is considered the largest, meaning “lucky” in Vietnamese culture.

Distribution: Google Play and Apple Store are, of course, the primary app stores in VN, but there are others too which have a local audience and reach. Two famous app stores in Vietnam are download.com.vn and appstore.vn. The former is the store for all kind of software and mobile apps and links back to Google Play or the Apple App Store. The latter is the biggest local store for hacked phones. Users can download many paid-apps to their tablets and smartphones for free. However, this app store distributes only Android and iOS apps.

Another thing that developers should consider, is to distribute via alternative app stores. In addition to the local stores, it will help an app to reach Vietnamese users outside Vietnam. However, to publish an app to many app stores simultaneously is not an easy thing. Each store has different requirements and standards regarding the account setup, the meta data required and the reportings provided. In case of “Vietapps Free”, our team looked for both local app stores as well as international ones. Thanks to CondeNgo, a very friendly and easy service to manage uploading apps to 20+ app stores all over the world. With more than 4 million Vietnamese living abroad, who integrate more and more with the local culture and economy, alternative app stores will be distribution channels to approach this community.

Anh Hoang Duc works for Stefan Bielau Consulting: “I hope that my own experiences help you somehow to have an overview of some ideas to consider to come into the Vietnam market. If you have any question or comment, feel free to share them with me: hoangducanh89@gmail.com.”