Since 2018, the popularity of casual games at home and abroad has just kept growing. Casual games are not occupy much space, easy to operate, allowing players to pick it up quickly while making the most of fragmented time, thus attracting users in a short period of time.

Now, old tile-matching games prove to be more likely to enter top grossing charts. To take a place in the market, we must first learn from great advertisers about the rules of advertising delivery and techniques of optimizing ad creatives. We can see the longest running ad creatives and the recent popular ads as well on the Top Ads at SocialPeta, so as to grasp the trend and the key elements to improve our ad creative production efficiency.

According to SocialPeta data, King’s Candy Crush Saga and Candy Crush Soda Saga, Playrix’s Homescapes and Gardenscapes, and Peak Games’s Toon Blast are regulars on the Top Advertisers. Advertising strategies of these evergreen products are worthy of our attention and use.

Candy Crush Saga’s longest running (nearly 4 years) ad on SocialPeta’s Top Delivery Days is in the form of a picture. It is a cute cartoon drawn in the game’s style, quite appealing to the eye, with the game name in the conspicuous middle position. 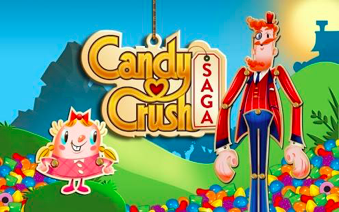 Yet, most of Candy Crush Saga’s ads are in the form of videos, catering to the rise of short videos in the mobile market in recent years. The videos retrieved on SocialPeta show that the advertising content of such old tile-matching games is mainly a demonstration of the basic gameplay, which intuitively conveys the core gameplay to the target audience and decisively ensures the solid base of Candy Crush Saga’s loyal paying users. 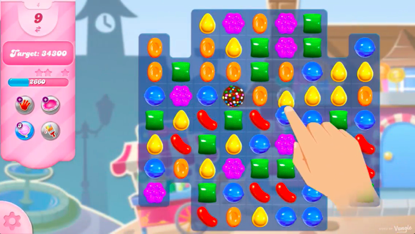 Compared to the old tile-matching game Candy Crush Saga, Playrix’s Homescapes is infused with new elements (construction + narrative). The data from SocialPeta advertiser analysis show that Homescapes has released more than 40,000 ad creatives in the past three years, which is one of the reasons for its sky rocketing ranking.

As a rising star, Homescapes seems to be running some different ads. In addition to the display of the tile-matching gameplay, there is also the demonstration of new elements-based life drama and house construction. With the fun of the game added, the conversion rate is also successfully improved.

The curious thing is, how could Homescapes release so many different ad creatives in such a short time? In SocialPeta’s ad creatives database, we see that in the past year, Homescapes has drawn upon a lot of creatives of other games and brought out creative ads that are completely irrelevant to its own gameplay.

Below, a screenshot was taken of two recent creative videos, respectively. In the heavy narrative scene, a scenario is set for the protagonist, and 2 to 4 options are provided to handle it. If the protagonist chooses the right one, the game will continue; if not, an accident will take place. Although this creative form retains the heavy narrative of Homescapes, it doesn’t reflect any core tile-matching gameplay or light construction elements.

Given the downloads and revenue of Homescapes, running a lot of fun ads that do not feature the core gameplay to attract target players to download and experience the game turns out to be successful. Of course, not all products can follow suit. A lot of preliminary market research is necessary to find products targeting the same audience to learn from.

At SocialPeta, we can find role models for similar games in the market. We can learn from and draw on the best of competing products, save time and effort in gaining the latest and hottest creative type and creative content, thereby promoting our products to the world step by step.