The platform wars – and what it means for a developer

There has been lots of research and articles trying to pin down the success of Apple and Google in effectively winning the mobile platform wars.  But possibly the best analysis comes from Vision Mobile’s Mobile Megatrends. As a developer when deciding which platforms to support, one may wonder if the game is over for any other operating system. Vision Mobile goes as far as including Microsoft and BlackBerry in the mix, but the attention is really on Google and Apple.

The two players come at it from very different angles. For Apple it is about driving hardware sales – for Google it is about strengthening their advertising core by knowing more about you. Vision Mobile goes as far as saying that Google is “the most closed open source project” in the market.  Google closes the loop through 4 key ways:

For developers, this last piece is a crucial one. Google has moved most of its critical APIs out of the open source OS to proprietary services: 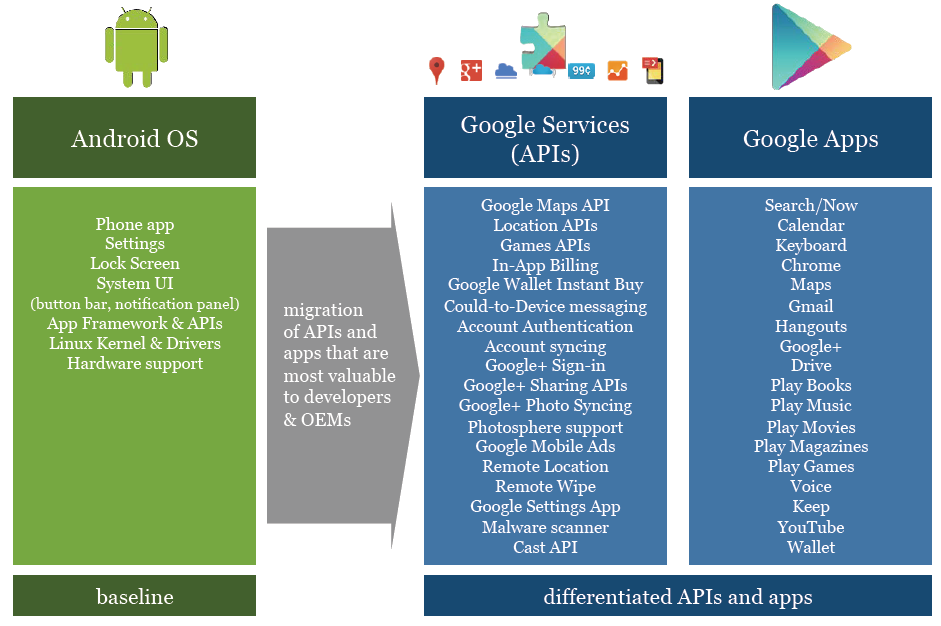 More and more of these services are becoming essential for apps. In addition, if there are links to an app store in the app, Google requires these to point to Google Play. There are forces at work trying to combat this. Players like Russia’s Yandex has developed maps, search and other critical APIs services such as the OpenIAB project.  Microsoft, through acquiring Nokia, has gained a mobile map service that Nokia acquired 7 years ago (interestingly for more money than Microsoft acquired Nokia for) to add to search, email and other services.  The question is of course whether the players manage to keep these services alive, given the cost of maintaining some of them.  None have however, managed to break up the insanely strong hold Google and Apple has on the app market:

The Vision Mobile report is a fascinating read about the competitive strategy utilized by Google and Apple, how they differ, yet have achieved market dominance for their respective companies. However, it also shows that the other players such as Facebook and Amazon are attacking it from a different angle – an OS independent one, and thus potentially creating huge value down the line. For the developers, perhaps the most important takeaway from the report is that the winners in the app space will be those that provide the best cross-platform experience, and that other players by entering platforms where these two companies do not yet dominate like TVs etc, leaves room for hope for a more open playing field down the line. In the end, that’s going to benefit everyone, especially developers.