Are you below the (app) poverty line?

Now that the new Developer Economics survey is coming to a close (make sure you participate by clicking the link at the bottom of the article!), it is a good time to reflect on some of the key messages from the previous survey. Developer Economics 6th edition was the largest ever research conducted on the app economy, with over 7000 developers participating.

The report goes in lengthy details on developer’s choice of platform. This is of course typically lead by the revenue potential of each platform, which paints a quite dismal picture: 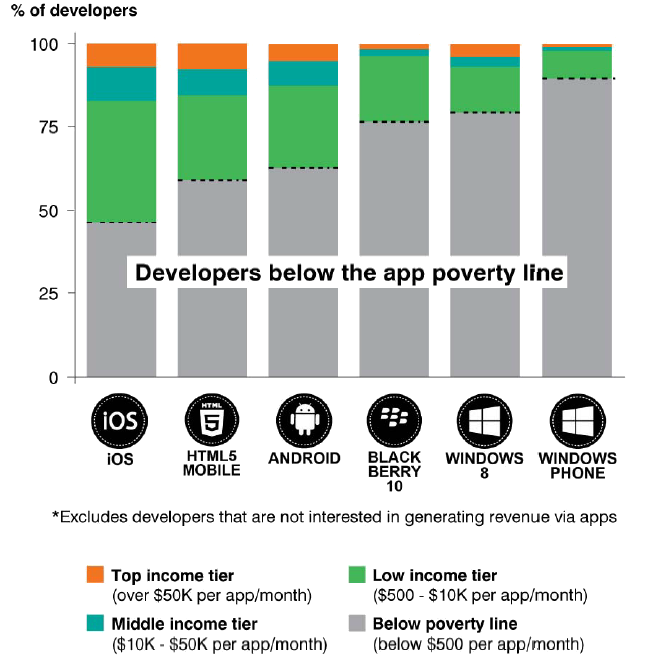 The poverty line, defined as making less than $500/app per month, dominates for most platforms, except for iOS where the majority is above the line. We do believe the data is skewed here, given the vast number of app developers out there, but either way it paints a picture of non-iOS developers having to put more effort into the marketing to make money.  Then again, this could be that there simply are a lot more Android devices and developers out there, and as Vision Mobile put it, could be a reflection of that iOS is the upmarket store and Android the outlet.  But for platforms like Microsoft, the explanation could be that simply the developers on the platform are more hobbyists than professionals, thus there are less quality apps available.

But somehow we don’t think the answer always lie in the mix of developers on the platform or the quality of the apps for that manner.  While normally quite brilliant in their analysis, Vision Mobile goes to say in a follow up article on which app store to choose that “if reaching an audience is an important part of your hobby creation then building an Android app and publishing on Google Play is the obvious option.” Not quite so with 1 million apps available.  In fact, the only obvious reason for publishing on Google Play is that you kind of have to be there to appear in searches + it helps your publishing in other stores.  But there is nothing obvious about Google Play as your only choice – unless you don’t mind being below the poverty line.  The only example of an alternative app store they give is with Amazon, where they point out that developers who also include Amazon make higher revenues. Pardon us for stating the obvious. If Coca Cola only distributed in Safeway they would clearly make less than Pepsi. But with a consumer product, reach does not always equate to being in the biggest stores, but being in the most stores.

So besides reach, what else can you focus on to get above the poverty line? Well, games are a good start. In 2013, according to Vision Mobile, mobile games accounted for 40% of downloads but 75% of revenues.  Vision Mobile estimates the market for games on Google and iTunes to be around $10bn, while AppAnnie and IHS puts the number at $16bn, a tripling from the year before.  Given the lack of market coverage for Google and poor payment options available in iTunes, it is likely that the market is significantly larger than this.  But signs are also showing that games may no longer keep it’s dominance, with non games expected to be 51% of revenues in 2017.  So the good news for those below the poverty line? This market is going to get a whole lot bigger!

p.s. An interesting digression. $500/month would:

– Put you 1/4th of the way to be above the poverty line in the US
– In India, would put you above the official poverty line by a factor of 41!
– Would earn you 6.7 times more than half the world’s population on average

Take the new Developer Economics 10-minute survey and win cool prizes! VisionMobile has launched a new app developer survey and is looking into opportunities and challenges in the app market. The results of the survey will be available as a free research report in July, while respondents can win great prizes, including an iPhone 5s, a Galaxy S5, a Sphero, a Lego Mindstorm robot, a Raspberry Pi Ultimate Starter Ki, a Das Keyboard – and more!What’s your take on the latest trends in app development? Which platform(s) should a developer choose to make money in today’s competitive market? Which is the right revenue model for your apps? Are you using any dev tools? Take the developer survey and have your say on the top app developer issues – contribute to the research and find out how your opinion stacks against other developers’.