Platform choices in a soon to be $140bn market

Every year Vision Mobile publishes Developer Economics. We find this report to be one of the most insightful reports on the app economy around, and best of all it’s free. In this article we give you a summary of the highlights, along with our analysis.

The report points to the dominance of Android and iOS, saying the two have created a network effect that nobody can compete against and have created a “Black Ocean” effect in the OS market, which even the biggest of companies can’t compete with: “Even Microsoft with an estimated over 5 billion dollars invested in Windows Phone has managed to secure a tiny 3% smartphones sales share in 2.5 years since the platform launched”. They further point to a relatively low developer mind share for the platform. However this somewhat conflicts with what developers will support going forward, with 40% of developers saying the Windows 8 platform will be an important platform to support, and the leading non iOS/Android platform in terms of mind share. Again, developer support is very closely linked to sales (i.e. addressable market for your apps), which is hardly a surprise. Choice of platform does depend on other things than revenue, which Vision Mobile details in terms of what the developer is interested in:

An interesting observation was made when analyzing Samsung’s bada failure. Vision Mobile goes to say:

“user adoption does not suffice in the new app economy. The positive feedback loop must include developers who benefit from an increased user base. If developers are left out of the loop, the necessary network effects will not kick-in and the platform will fail to grow”.

This is indeed good news for developers going forward, providing this message gets through to all the challengers to the iOS/Android duopoly. There are likely a lot of incentives to be made available over the next few years.

Revenue wise, the data shows that iOS leads the pack in terms of average revenue per platform:

This is somewhat surprising given the number of apps available on the App Store, and is probably due to a bias in the sampling that Vision Mobile has made. In the past, being one of fewer on stores like the BlackBerry store has proven to be quite lucrative for developers.

Developers increasingly face tough choices in terms of which tools to use, with over 500 companies now providing tools and services. The good news is that tools have proven to be substantially beneficial to developers, highlighted by the fact that the more experienced a developer is, the more likely they are to use tools: 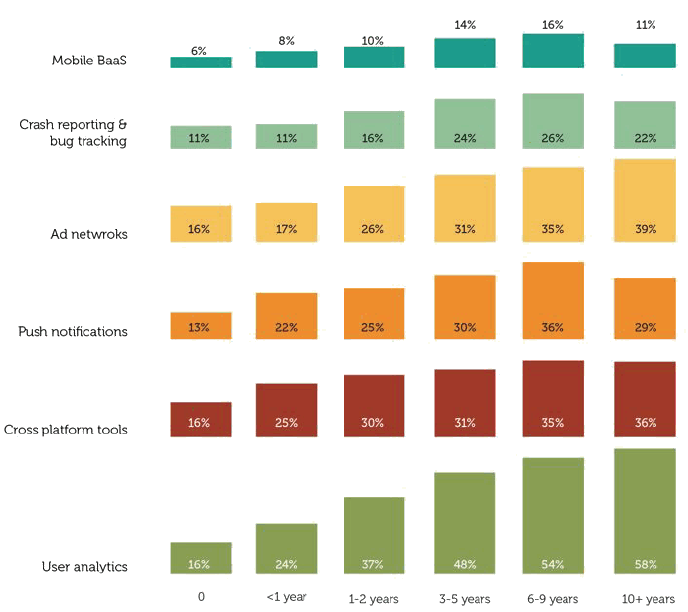 Vision Mobile points out that developers have become a hugely important target for a large number of companies, as “developers are modern-day channels that help them reach new customers, discover new use cases and propel their growth”. Targeting developers is an expensive proposition, and Vision Mobile goes into detail on how to segment developers, not by platforms they work on but by the category they fall under:

They venture on to say that the targeting must be done by these segments, but also points out that developer’s primary incentive is to be creative and get a feeling of achievement when building an app, while building a successful business and having fun is more important than making money. We certainly believe this to be true at CodeNgo as well, which is why our focus is all about taking the pain away from distribution and managing the business, so the focus hopefully can be about enjoying being an app developer.

Where the app economy is going

Forecasts will always have to be taken with a grain of salt, but it is interesting to note that Vision Mobile believes the app economy, which encompasses everything about the building and distribution of apps, will be as much as 50% of the handset market in 2016. This means that the market is likely to be around $143bn in less than 3 years from now, more than doubling the 2013 estimate. Those are numbers we like!